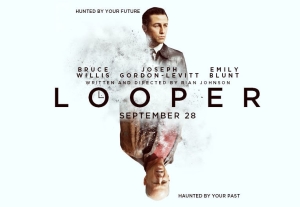 In My Humble Opinion: The movie Looper promised to deliver so much but unfortunately ended up letting me down in the end.  Maybe it was all the hype surrounding the movie, but for once I’m going to ignore all that hype and good reviews, go out on a limb and say that the movie itself didn’t live up to either.  That being said, I will admit the concept of the movie was interesting.  I’m always a fan of the time travel genre and have reached a point where I accept that any movie dealing with said genre is going to have parts that are not only confusing, but make you question the validity of what has transpired in the first place.  Joseph Gordon-Levitt plays a Looper whose job is to kill people who are sent back in time by the mob. (I won’t get into all the details or we’d be here all day)  All loopers will eventually one day close their loop by killing their future selves.  This might sound like a bad deal, but when a looper “closes his loop” he’s given a gold pay-day and sets out with the knowledge that he has the next 30 years of his life to live it up with the pay-day he’s just been given.  Well apparently there is a new threat in the future named The Rainmaker (no it’s not Matt Damon) that is closing all the loops.  Bruce Willis voluntarily comes back in time after his wife is killed to stop The Rainmaker from ever coming into existence, since he feels The Rainmaker is responsible for his wife’s death.  Anyway, like I said the concept of the movie was a fresh take on the genre and the movie itself started off strong.  There were a few things however that really kind of bothered me throughout the movie.  I’ll start off small and build from there

2.  Like I said, the first part of the movie was pretty exciting.  Joseph Gordon-Levitt offers up a narration of how the world has changed, time travel has been invented, a certain amount of the population are now telekinetic, etc. The first half of the movie really was strong and I thought it was going in a good direction.  But when Joseph Gordon-Levitt gets to the farmhouse it’s just downhill from there.  The way they have Joseph Gordon-Levitt reveal himself to Emily Blunt is ridiculous.  She and her son live on a farm out in the middle of nowhere.  It’s night-time and Emily Blunt runs out with a shotgun to investigate a noise in the fields…suspension builds and she can’t bring herself to shoot whatever is coming towards her.  Joseph Gordon-Levitt decides to reveal himself, come out and protect her from…wait for it…a deaf-mute that is traveling the farmlands looking for money.  Again, really?  In the middle of nowhere, there is this Lenny-esque deaf-mute out looking for George and his rabbits or something.  Surely with the creativity lended to the overall plot a better way of having these two characters meet could have been arranged.  Not to mention, I still don’t understand Emily Blunt chopping away at that big ass tree stump on the farm?

All this being said, Rian Johnson had a fresh idea for the overall plot of the movie, which is rare nowadays.  I would only recommend that in the future he focus more clearly on the main plot of the movie as opposed to trying to prove how creative he can be.  In doing so, he offers no real characters that you pull for as a viewer.  Even the main character Joseph Gordon-Levitt portrays isn’t someone you can really identify with.  Anyway, hopefully Rian Johnson gives it a try on another Science Fiction movie because the genre could use creative people such as Rian Johnson.