← Oz The Great And Powerful: Finally, Previews That Surprised Me
Escape Plan…What The Tag Line Should Really Say! →

A Bird, A Plane, A Man Of Steel SPOILER ALERT 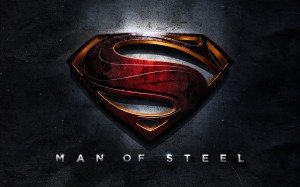 The planet Krypton faces imminent destruction due to an unstable core, and its ruling council is under the threat of rebel General Zod and his followers. Scientist Jor-El and his wife Lara launch a spacecraft carrying their newborn son Kal-El and a genetic codex. After Zod murders Jor-El, he and his followers are banished to the Phantom Zone, but manage to escape when Krypton explodes. The infant Kal-El lands on Earth in Smallville, Kansas, where he is discovered by couple Jonathan and Martha Kent, who name him Clark and raise him as their adopted son.

Clark’s Kryptonian physiology affords him superhuman abilities on Earth. With Martha’s support, young Clark gradually learns to hone the abilities that initially cause him confusion and discomfort. Jonathan reveals to a teenaged Clark that he is a humanoid alien from another world, and advises him to not utilize his powers publicly, fearing that society would be dangerously apprehensive of him. After Jonathan is killed by a tornado, an adult Clark spends the next several years living a nomadic lifestyle, working different jobs under false names to cover his tracks and hide his identity. He eventually discovers a Kryptonian scout ship whose technology allows him to communicate with the consciousness of Jor-El in the form of a hologram. Lois Lane, a young journalist from the Daily Planet, also discovers the ship while pursuing a story, and is rescued by Clark when she is injured. Lois’s editor Perry White rejects the story she submits about her “superhuman” rescuer, whom she tracks back to Smallville.

Detecting the scout ship, Zod travels to Earth where he demands that Kal-El must surrender to him. Because Zod threatens the population if he does not comply, Clark agrees to surrender to the U.S. military, who thus hand Lois and Clark over to Zod’s right hand Faora. Zod reveals that he intends to use a terraforming “world engine” in conjunction with his own spaceship to transform Earth into a more Krypton-like planet and eradicate the human population, then use the codex (which has been revealed to be located within Clark’s cells) to repopulate the planet with genetically-engineered Kryptonians. After Clark and Lois escape with the help of a computer copy of Jor-El’s personality uploaded into Zod’s ship, the superhero arrives to stop Faora’s force at Smallville from seizing the spacecraft that brought Superman to Earth. The confrontation leads to a destructive brawl with the Kryptonian land forces while the US military attacks them all indiscriminately. While Clark manages to defeat the renegades and convince the military that he is on their side, the general learns that the codex is imprinted into Clark’s own genetic structure. With reassurances that Kal-El need not be taken alive to get that information, the General deploys the world engine to the Indian Ocean and initiates the terraforming by hovering his ship over Metropolis.

To stop this attack, Clark, now dubbed “Superman”, and Lois inform the US military of a countermeasure suggested by the Jor-El program: use the spacecraft that brought Superman to Earth in an aerial strike against Zod’s ship, thereby creating a portal to return the Zod’s ship crew to the Phantom Zone. Meanwhile, Superman stops the engine in the Indian Ocean with considerable difficulty and then manages to return to Metropolis to enable the bombing run to succeed despite the renegade Kryptonians’ resistance. Zod, having been separated from his ship earlier, still remains, and he and Superman use their powers to engage each other. After a battle, Superman is forced to kill Zod to save a group of innocent civilians from his nihilistic rampage, but he is supported by Lois to cope with this traumatic necessity. Superman decides to blend into the normal world by resuming the identity of Clark Kent, and is hired by White as a reporter for the Daily Planet.