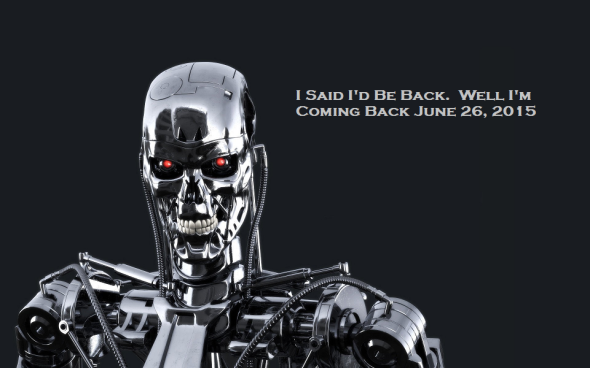 In My Humble Opinion:  The original Terminator is one of the best science fiction films ever (maybe even THE best).  It was followed by Terminator 2: Judgement Day  which could be argued as one of those, “the sequel’s better than the original” movies…you know what I’m talking about, Godfather 1 or 2, Alien or Aliens, etc.   Anyway, after Terminator 2: Judgement Day…the franchise started to implode.  Terminator 3: Rise of the Machines was lackluster.  Arnold was starting to show his age and the plotline (Terminator sent back in time to kill John Connor’s Lieutenants?) just seemed ridiculous.  Not to mention; how could you ever create a bad Terminator that could top Robert Patrick’s T-1000?  Short answer, you couldn’t.  A reboot was attempted with Terminator Salvation that excited me because the audience  was finally going to see the Future War Against The Machines.  Unfortunately the elaborate and exciting world that James Cameron had created through flashbacks in the first two movies was completely different and frankly, extremely underwhelming.  I mean really, you can’t have a War Against The Machines and not have the Plasma Rifle in the 40-Watt Range am I right?  Oh yeah, and there was that little Terminator: The Sarah Connor Chronicles show that only lasted 31 episodes.

But if at first you don’t succeed, try and try again.  It was recently announced that a new Terminator film is going to be released on June 26, 2015.  The new film, simply called Terminator is the first feature in a planned trilogy.  And to those of you that are curious, yes Ah-Nuld has confirmed that he will return as a Terminator (how involved his character will be is still unknown)  Personally, and consider this a plea, I’d like to see the studio bring back Michael Biehn and cast him as the future leader John Connor.  I mean if Michael Biehn’s character Kyle Reese is supposed to be John Connor’s father, you won’t be able to cast a better actor when it comes to family resemblance.