← Noah Plot Summary Revealed…CAUTION SPOILERS BELOW
The Walking Dead: Alone – According to Sean →

The Walking Dead: Alone – According to Travis 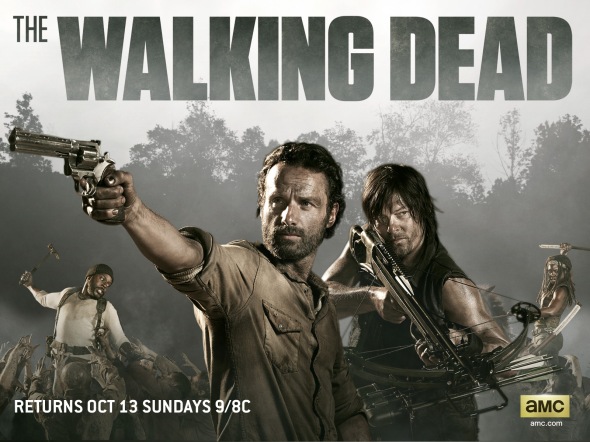 In attempting to review this week’s episode of the Walking Dead, I’ve had a hard time not making it about all the things that are and have been frustrating me about the entire series.  Maybe it’s because this week’s episode was a good example of a bunch of them or maybe it’s just that some of the issues the show is having are making it harder for me to enjoy it.  Either way, big sigh, here we go.

Right out of the gate we get a completely irrelevant flashback about character Bob Stookey, about whom we know little at this point, other than he was/is an alcoholic and he has some medical training maybe.  So here we go with the writers (and I feel inclined to blame Robert Kirkman primarily because I don’t like him) beating us over the head with this “new found” focus on character development.  So what does this little flashback tell us about old Bob?   Ummmm…that he wants to be around people because wandering around by yourself sucks?  That he’s not afraid to die?  I don’t even know really.  Then, following the pattern set up for this season, or this half of this season, or whatever it is, the focus is on a couple of smaller groups, in this case some Maggie/Sasha/Bob and some more Daryl /Beth, as if we didn’t get a full dose of that pair last week.  Although, I can see why they added the Bethryl  (did I just do that?) interludes as the material for the other mini-group is pretty poor.

So stuff happens, conversations are had, characterization happens for some of the people we didn’t know that much about, and at the end of the day, down the road we go again with no end in sight, save some vague place called Terminus that we know even less about than Bob Stookey at the end of this episode, which isn’t much.  My opinion?  The tease on this place has been way too long already and there’s no way it will live up to this kind of buildup.  This is what drives me insane about this show.  There is no forward momentum whatsoever, no narrative drive.  I mean, I realize they’ve been out there a long time and survival is key, but shouldn’t they at least be attempting to see if there is any salvation to their predicament?  Maybe try to at least leave the state of Georgia or the tri-county area at large?  Could be the zombie pandemic ends as you head north when you stop seeing Stuckeys, Rick and company will never know because they never leave the 20 mile area around where they’re from.  As Sean is fond of pointing out, perhaps T-Dogg’s “let’s head for the coast” idea is starting to look a little more appealing.

So we’ll see what happens next week.  Looks like we’re getting a big ol’ dose of Tyrese and Carol, i.e. another week of running in place.  I pretty much feel like I could tune out for the next couple of weeks and come back for the season finale and won’t have missed much.  In fact, maybe that’s the strategy for the Walking Dead.  Watch the first and last episode of each half of each season and just skip all the filler.

One Comment on “The Walking Dead: Alone – According to Travis”