In My Humble Opinion:  Jack Ryan: Shadow Recruit is a ridiculous departure from the Jack Ryan character we’ve become familiar with.  If you’re unfamiliar with the character Jack Ryan, he is a character featured in Tom Clancy’s novels as well as their big screen adaptations.  If you haven’t seen the films surely you’ve at least heard of:  The Hunt for Red October, Patriot Games, Clear and Present Danger, and The Sum of All Fears.  Now since I haven’t read the novels I will be referring to the movies because those are what I’m what familiar with.  Ryan is a CIA analyst (though I believe he’s retired in Patriot Games) who finds himself thrust into dangerous situations where he’s forced to operate outside of his comfort zone in order to save the day.  He’s kind of an everyday man dealing with situations he’s not used to and is generally unprepared for.  To me, that’s what always made him a little bit more relatable and realistic knowing he was in over his head; that was always the appeal of his character.  This all led me to ask the question after seeing trailers for Jack Ryan: Shadow Recruit, “Why?”

Jack Ryan: Shadow Recruit breaks formula and features Ryan as a CIA field agent who must travel to Moscow to prevent an imminent terrorist attack.  If you’ve seen the trailers perhaps you agree that the premise looks more James Bond / Jason Bourne than Jack Ryan.  It’s just too much of a departure in my opinion.  I remember with all the other movies that preceded Shadow Recruit there was a running gag in which Ryan had to remind anyone and everyone around him that he was just an analyst.  Alec Baldwin (my favorite Jack Ryan) put it best in The Hunt for Red October when he said, “I’m not field personal, I’m just an analyst. I’m not an agent, I just write books for the CIA.”

So back to my question of why?  Why reboot a character that still has plenty of source material to pull from?  There are still five other Tom Clancy novels featuring Jack Ryan that haven’t been made into feature films.  Why not adapt those and stay true to the character?  Why not just start fresh with a brand new character instead of trying to cash in on the name Jack Ryan?  I mean if Hollywood really wants to bring a literary figure into the action film genre why not tap into the character Mitch Rapp?  Mitch Rapp is a character featured in the novels written by Vince Flynn (awesome spy name by itself right?) that IS a spec ops, black bag, CIA spy type that travels the globe preventing terrorist attacks, keeping America safe, etc.  Personally, I think he’d be the perfect character to be brought to the big screen.  Sorry for the rant, just doesn’t make sense to me.

THIS POST IS DEDICATED TO TOM CLANCY AND VINCE FLYNN 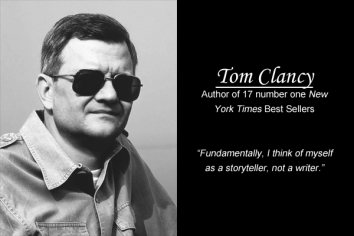 TOM CLANCY PASSED AWAY ON OCTOBER 1, 2013 FROM UNDISCLOSED ILLNESSES.  HE WAS 66 AT THE TIME. 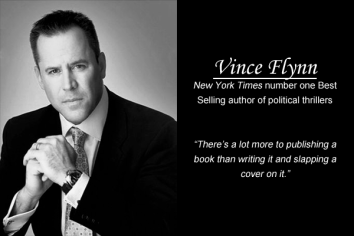 VINCE FLYNN PASSED AWAY JUNE 9, 2013 AFTER A THREE YEAR BATTLE WITH PROSTATE CANCER.  HE WAS 47 AT THE TIME.